From Boy to Man, a brief tale.

Growing up, I was a wet noodle; spineless, anxious and afraid. Granted I was diagnosed with high functioning Autism, and ADHD at age 7; my anxiety levels were extreme. Raised by Women, no father figure and stricken with anxiety, I had no idea what it meant to be a Man, or even that there was the concept of being a Man. I was bullied as a teenager, and I felt disconnected from my emotions (likely because of my autism); I felt disconnected from other people. I felt lost, drifting through the black void, suffering, directionless; I needed a northern star. I needed someone to teach me how to be a Man.

The adoption of traditional masculinity, and its effects.

In my very early twenties, I spent an enormous amount of time obsessed with YouTube and podcasts, such as: Joe Rogan, Jocko Willink, David Goggins & Jordan Peterson (still obsessed). These Men taught me the foundations of traditional masculinity. Hard, disciplined & strong; living with integrity, acting with purpose and pushing myself physically and mentally. I adopted this philosophy verbatim, and I no doubt reaped the benefit. Over time, I was transformed to something approximating a baseball bat; lethal. I was physically strong and I could fight. I was extremely disciplined and I acted with integrity; I pursued my higher goals relentlessly. This philosophy brought me success, but it denied me connection with my feelings. The essence of discipline is to act without regard to personal emotion, and I’m just not sure if I want to live like that. I don’t like having to force myself to the gym after waking up incredibly tired, and do I really have to? Why, and for what benefit? I don’t want to always feel the need to compete in every aspect of life; what’s the point if our environment does not demand this of us? If the greatest satisfaction that we draw from life is a direct result of the quantity and quality of our relationships, why wouldn’t I make this the prime focus of my life?

What is traditional masculinity, and how did it serve us in history? 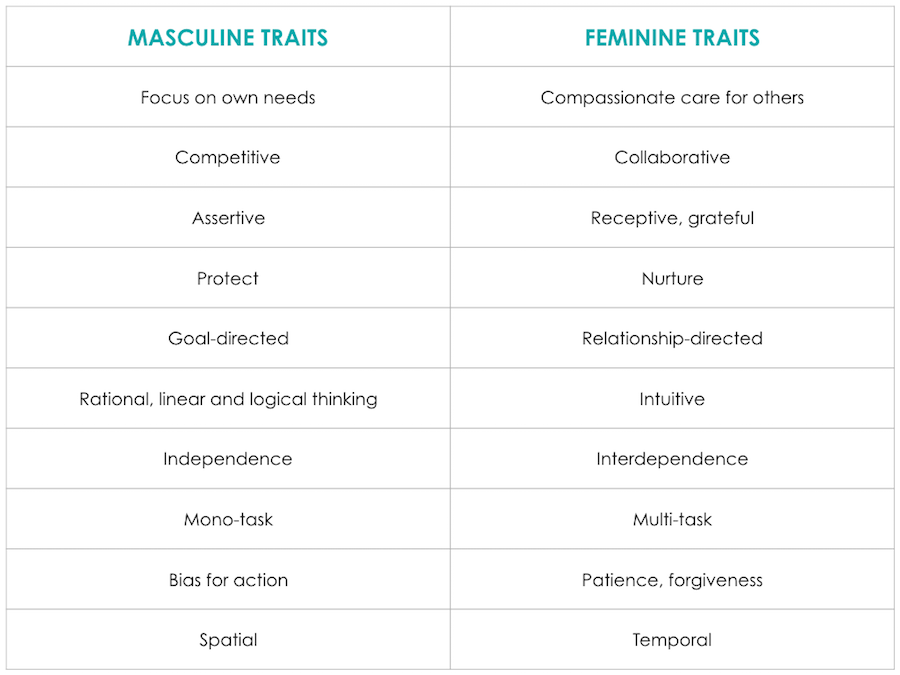 As we can see here, masculinity is primarily about self, think: Donald Trump & Conor McGregor. Competitive, forceful, prone to arrogance and self-absorption. Whilst femininity is about care, collaboration and togetherness; forgiving, nurturing and receptive. Now there are clear pros and cons for each energy when taken to it’s limit case. For example: when action is required, the entirely feminine energy struggles to act, for they are in principle receptive. When the entirely masculine energy needs to yield and act with grace, this poses a significant challenge for they are, in principle, assertive and biased towards action. The feminine can easily read between the lines, a skill of which is incredibly valuable in the building of relationships and community. The masculine maintains composure through difficult times, for it knows how to create space between events and emotion, exercising logic to make big things small. Each energy possesses great power and great weakness, of which is entirely dependent on context.

Human history has been relentless struggle against mother nature, our environment necessitated extreme masculinity to aggressively protect our own and dominate that which threatened; but we don’t live in this world anymore. Our environment isn’t entirely comprised of predators and mortal danger, it is true that we actually live rather comfortable lives now, and I’m of course speaking about the first world. So what purpose does extreme masculinity serve, and do we really require Men to be so dominant, aggressive and forceful? The answer isn’t so obvious to me.

The dangers of overdoing masculinity, of imbalance.

We live in a world where machines rule, a world where we are required to do less and less in order to live a comfortable life. A world where our overproduction (doing) has created an ecological catastrophe on a scale that has never been encountered before in the history of our species. The dominant neoliberal economic philosophy makes us believe that we are only of value if we are producing, which is to say, doing. But can a life of doing, after a certain threshold, really provide the life we want? What benefit is material wealth if, inside our hearts and minds, we feel vacuous, empty and disconnected from others and from nature? Could it be that doing is no longer as important as it once was, and perhaps even harmful past a certain point? Doing for the sake of producing, for the sake of consumption, for the sake of economic growth. The desire for unending growth creates significant problems within the world; excessive inequality, a throwaway society of which makes little ecological considerations and the implication that labour (Human beings) are expendable in the pursuit of economic growth. This is a pernicious ideology, rooted in extreme masculinity. Is this really the best way forward, for all life forms on our planet, both Human and non-Human? What can be done about this imbalance of energy?

I believe that we need more cohesion, cooperation and togetherness; however, it is important to maintain an individual identity that is separate from the group. The competition for resources, for power, and for control is inherently divisive. We must ask ourselves: do we really need more division in a world already so divided? We now harbour weapons so powerful, so destructive, that they can decimate entire cities in seconds, so tell me, do we need further division? Could it be that further division edges us closer and closer to extinction? Let me make myself very clear, I am not trying to assert that masculinity is bad. I think masculinity is important, I just think it should be balanced with a similar amount of feminine energy. Balance competition with collaboration, assertion with consideration, force with flow; aggression with yielding,  doing with being, independence with interdependence, and so on and so forth. We Men must embrace our feminine side and begin to create space between us and our inherent desire for power, control and for dominance.

What does it mean to be a Man in the modern age?

To be considered a Man, must one be hyper masculine, or can one remain a Man whilst embodying a balanced energy between masculine and feminine? For me, being a Male has nothing to do with the degree to which we adopt masculinity and femininity; I don’t believe there is any one particular way for us to be. I’ve been extremely masculine in my past, entirely unbalanced; arrogant, self-obsessed, overly competitive and selfish. And now, I am, a close to even split, I would say a 60/40 composition of masculine and feminine energy; I quite enjoy it this way too. I enjoy being fierce, strong and being able to protect, but I also love being held, given affection. I am assertive and dominant, but I am also easy going, flexible and open minded. I am independent whilst simultaneously being comfortable with relying on others. It’s nice to be in control and to be leader for some time, but not all the time; too much reliance on me can be draining, and sometimes I’d like to share the load. It’s nice for someone else to take the reigns.

I’ve always struggled with the idea that in order to be a Man I must be physically dominant, and I think I still struggle with this. And whether this is a valid perspective or not I’m still unsure. I like being physically strong, and I like being able to defend myself against threat. I also enjoy the sexual benefits that being a dominant and physically strong male provides; polarising and inherently attractive to the divine feminine. I carry myself with such confidence, as if my every step were a strike to the pavement with Thor’s mjolnir; however based on my experience, the less I push myself physically, the less confidence I carry with me. I’ve found that there is a linear relationship between my physical prowess and how often I push myself past that zone of physical and mental discomfort, and my level of confidence. I’ve also observed that pushing myself too much creates a sense of arrogance with me, as if I am superior. I don’t want this, and I don’t believe this is conducive to healthy relationships.

I lived an intensely disciplined life for many years, and this meant waking up tired, dreading the gym and forcing myself to go. I would hate every minute of it. It sucked. To achieve this I had to bully myself. I spoke to myself inside my mind like a drill sergeant to a new recruit. This worked effectively, because I would lose respect for myself if I strayed from my strict regimen; however, this had negative effects for my mental health and social relationships. A missed workout meant a feeling of loss, a feeling of disappointment; my self worth was inherently founded on the degree to which I was disciplined. By holding myself to unreasonable, and excessively perfectionistic standards, I in turn subconsciously imposed these same standards onto others. By projecting my philosophy of how one must act onto others, I often became angry at and judgemental of other people. Now you can imagine what effect this had on my interpersonal relationships… Since refusing to hold myself to these draconian standards of forcing myself to operate at 150% in this one aspect of my life, and choosing instead to live at 80% in many aspects, I’ve experienced significant positive benefit. My relationships improved, I’m happier, I’m more in touch with my emotions and I have more empathy and am more tolerant and accepting of others.

It seems that my life is richer, my relationships deeper and my mental health better living with balanced energy. Extreme masculinity made me judgemental and punitive of myself and others; my interpersonal relationships suffered too. I can still feel dominant and masculine living with balanced energy; I can also feel soft, empathetic, centered and kind too – I don’t feel like a lesser man. In fact I feel like more of a Man, like a leader; someone who genuinely cares about others. I feel that our world requires gentleness, forgiveness and acceptance now more than ever. Division is pernicious, and if our aim is to live peacefully, in a way that maximises the quality of life for all, then division is not an effective strategy. Love yourself and you will in turn learn to love others; accept yourself, and you will learn acceptance of others. What is means to be a Man is changing; are you gonna keep up with the changing of the tides, or will you be left behind? The choice is yours.

I'm a man who is trying to improve the world. I know this is an arduous task, however, broken down logically it isn't so complicated. The world is made up of individual humans. Change a human, change a part of the world. Start with yourself. View all posts by Startwithmyself